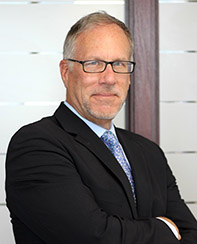 Eric Bensen graduated from New Smyrna Beach High School and went on to obtain a Bachelor of Arts degree in Psychology from the University of South Florida. While an undergrad he was an active member in the Phi Delta Theta fraternity which was continuously involved in various community projects and programs. Mr. Bensen went on to earn his Juris Doctorate degree from Cumberland School of Law, was an officer with the Phi Delta Phi legal fraternity and during his third year at law school, was certified to prosecute various criminal cases for the Office of the District Attorney.

After graduation from law school Mr. Bensen immediately began working as an Assistant State Attorney prosecuting all misdemeanor and traffic offenses including drug, theft and DUI cases. Approximately five months later he was promoted to the felony division where he prosecuted all felonies, from third degree to capital offenses, including drug trafficking, organized crime and murder cases.

Mr. Bensen subsequently entered private practice and has focused on criminal defense and all areas of family law including divorce, alimony, child custody, contempt actions, Dependency and all other areas of family law. He is a member in good standing of the Florida Bar and is licensed to practice in all state courts and the Federal Court Middle District of Florida and is a member of the Orange County Bar Association.

Mr. Bensen is an aggressive litigator who has gained vast experience in his years of prosecuting and defending cases during jury trials and trials before the Judge. He has represented clients in criminal and family law matters throughout the State of Florida, from the Panhandle to the Keys. Mr. Bensen stands ready to assist you with your legal issues. Call for a consultation.