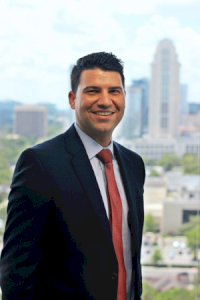 Attorney Michael Vaghaiwalla grew up in the Central Florida area and earned his Bachelor of Arts in Political Science with a minor in Legal Studies from the University of Central Florida. Thereafter, Michael began his legal career working as a paralegal with a prominent firm in Orlando handling medical malpractice, wrongful death, general negligence, and product liability cases. Michael’s success as a paralegal furthered his desire to help people and led him to attend law school.

Michael earned his Juris Doctor from The Florida State University College of Law. Based on his outstanding legal research and writing skills, Michael was selected to research and draft a significant section of an Amicus Brief that was filed with the United States Supreme Court on a historic public interest issue. Michael also wrote a public interest article that was published by the Orlando Sentinel that received national recognition from Kaiser Health News.

Michael spent a significant portion of his time in law school giving back to the community by donating his time and efforts to Florida State’s Public Interest Law Center where he helped medically fragile children obtain access to healthcare. Michael continues to actively pursue opportunities to give back to the community.

Michael now turns his practice to advocating for individuals in all areas of family law. Michael is a member of the Florida Bar, the Orange County Bar Association, the American Bar Association, and the Central Florida Family Law American Inn of Court. Michael is licensed to practice in all Florida trial courts as well as the U.S. District Court for the Middle District of Florida.