What Happens To Embryos In A Florida Divorce? 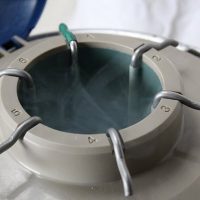 Divorce is never a simple process, but the ever-evolving field of reproductive technology has added a couple of layers of complexity. If you are a Florida resident considering divorce, you may be wondering how divorce will impact existing embryos that you made with your partner. Embryos are a particularly complicated area of divorce law because they generally contain genetic material from both partners, as embryos are generally an egg fertilized by a sperm. This gives whomever is awarded ownership of the embryos a great deal of power to either keep their spouse from becoming a parent or force them into parenthood against their wishes. Luckily, in Florida, determining how embryos are treated is generally a fairly straightforward process.

How are Embryos Treated in a Florida Divorce?

Florida differs from many other states in that it actually has some clear laws that apply to the treatment of embryos. Under Florida law, any couple that goes to a fertility doctor or center must enter into an agreement regarding the treatment of their embryos should their circumstances change. Generally, this agreement establishes that both parties jointly own the embryos and any other genetic material being provided, including pre-embryos. The agreement also generally stipulates that the doctor must dispose of the genetic material and embryos in the event that either spouse dies or the spouses divorce. If this is the only agreement in effect, then ownership of the embryos is unlikely to be relevant in determining the equitable distribution of property, as the agreement will dictate and the embryos will simply be disposed of by the doctor or fertility center that initially created or collected them. It should be noted, however, that if the spouse’s have a more recent and legally valid agreement, such as a postnuptial agreement, that dictates how the embryos should be treated, then this agreement may dictate over the fertility center one.

What Happens if there is No Agreement?

Of course, in some cases, even though it is the law, parties will not have entered into an agreement regarding treatment of the embryos during a divorce. In this case, the embryos will remain the joint property of both parties until the court can reach a decision on which party should receive them. In making this decision, the court will determine the totality of the circumstances. This can include considering each party’s reasons for wanting the embryos and whether they want to use them to have children or to destroy them. There is some precedent for weighing one spouse’s desire to have children over the other spouse’s desire not to, if the embryos are likely the first spouse’s last opportunity to do so. If there is no existing agreement and one spouse has passed away, the embryos will be given to the surviving spouse.

If you are considering divorce and want to make sure that you get the settlement that you deserve and protect your interests, the experienced Orlando family attorneys at Greater Orlando Family Law are ready to help. Contact us today to schedule a consultation.