Who Gets The Debt In A Florida Divorce? 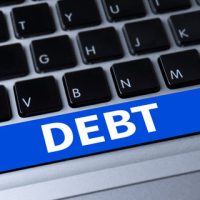 If you have filed for divorce in Florida, or are considering doing so, you likely have a lot of questions and concerns. You may be worried about who will get the house, how jewelry will be divided, and how other property will be split between you. But have you considered how your debt will be treated? Most American married couples have an average of $145,000 in debt, so it’s no small matter when it comes time to determine how to distribute it. It’s important to have an experienced Florida divorce attorney on your side so that you can be sure that all debts are accounted for and to ensure that you can get an equitable divorce settlement.

How Debt is Divided in a Florida Divorce

In Florida, when it comes to divorce, assets and debts are treated quite similarly in the equitable distribution process. Both assets and debts must be assessed in order to determine whether they are shared or separate property. Assets owned independently by either spouse prior to entering the marriage will remain their separate property and will not be subject to equitable distribution. Likewise, debts belonging to either party prior to entering a marriage, such as school loans, will remain the individual responsibility of the spouse that they belong to. Debts incurred during the marriage will be treated as shared debts, and will be divided between the parties. In Florida, assets and debts are not automatically divided down the middle. Instead, Florida is an equitable distribution state, so judges use a number of factors to determine what a fair division of all debts and assets would be. Of course, if the parties are able to agree between themselves on how they want their debt divided, they do not need to involve the court at all. Many parties choose to utilize a third-party mediation or negotiate with their own attorneys in order to avoid the courtroom altogether. Additionally, if the parties have a prenuptial or postnuptial agreement that covers how debts should be treated in the event of a divorce, this agreement will control the outcome, and the court will simply enforce it.

Exceptions to the Equitable Distribution of Debt

In most cases, all debt assumed during a marriage by either spouse is considered shared debt of the couple, which is subject to equitable distribution during a divorce. However, there are some exceptions. If one spouse took on debt without the knowledge of the other spouse, and the debt did not benefit the other spouse in any way, then the debt may remain the responsibility of the spouse who assumed it, instead of being subject to equitable distribution. It is often difficult for the other spouse to prove that they did not benefit from the assumption of the debt in any way. However, it may be possible in some cases. For instance, if their spouse took out a credit card to pay for gifts and vacations for someone that they were having an affair with, this would be seen not to have benefitted their spouse in any way, and would remain their responsibility to pay off.

If you are going through a divorce, you need a dedicated Orlando divorce attorney to fight for you and make sure that your interests and assets are protected so that you get a fair and equitable divorce settlement. Contact Greater Orlando Family Law today to schedule a consultation.